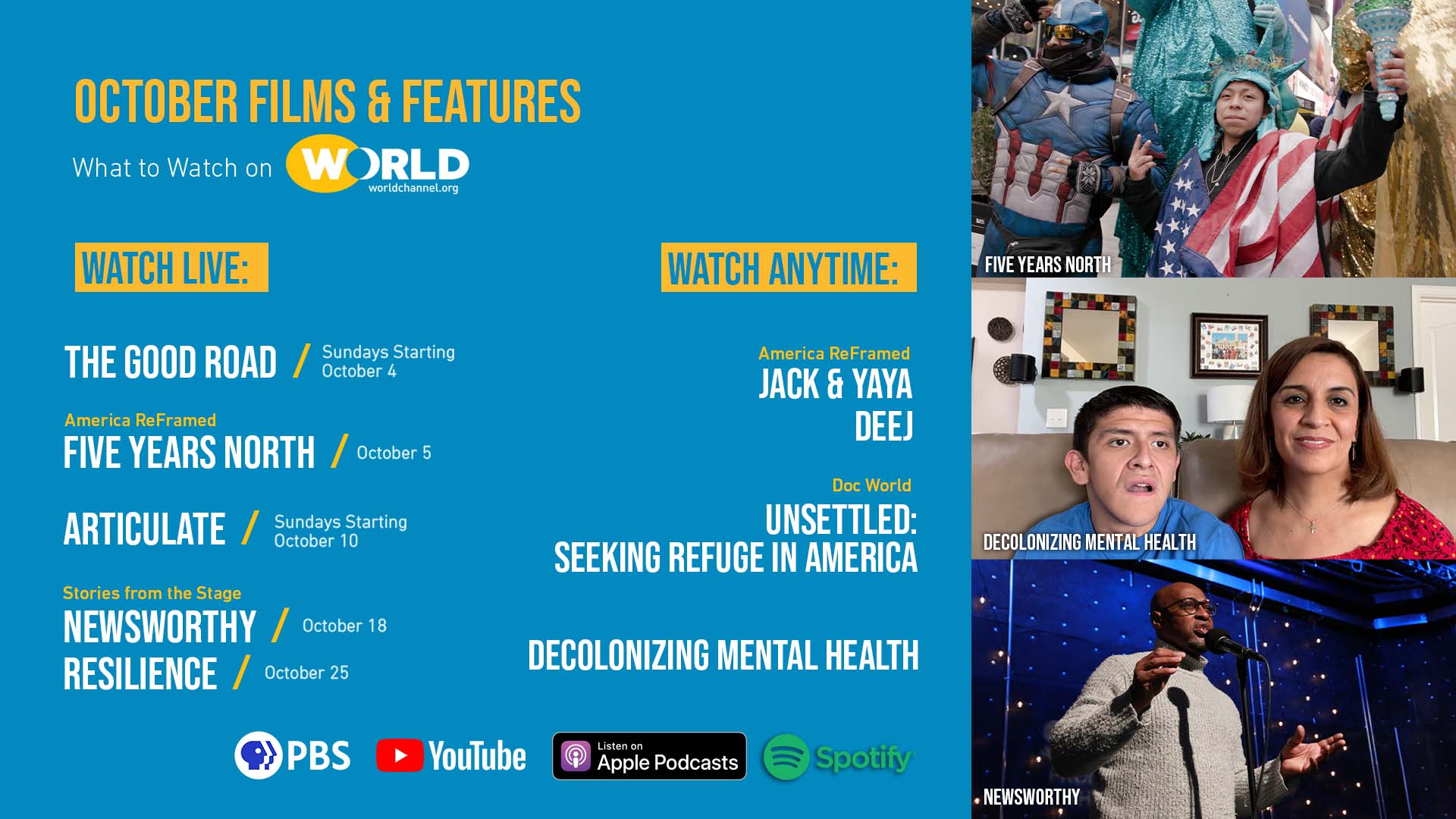 Films that open our eyes to diversity by examining awareness and reform around disabilities, gender, orientation and mental health.

Over the last year, discussions surrounding diversity, equity and inclusion (DEI) have made their way through colleges and universities, public and private companies and within governments, leading to initiatives that seek to better understand and accommodate the great variety of human experiences. Ability in the workplace is an area that is receiving a new level of attention as organizations and employers work to defend equity and inclusion, and is just one of the many perspectives we examine in October for Diversity Awareness Month.

As social and political tensions flare up around the world, now more than ever it is critical to explore and embrace humanity’s differences. Each of the films offered on WORLD highlight our individual differences, reminding us of the very vulnerable, yet rewarding, human experience.

BIPOC mental health advocates and practitioners from every corner of the U.S. work to dismantle the industry’s systemic inequality; two transgender best friends support one another over a lifetime; a breast cancer survivor learns that real love is about liking someone just the way they are; and an Olympic ski jumper whose physical ability was changed in a moment never loses his spirit.

While adding new voices to the conversations around diversity, especially disability awareness, in October, WORLD will continue to amplify the voices of the Latinx community this month with our Hispanic Heritage Month Viewer’s Guide.

Watch the story of one of the most indelible figures of the 20th century, a three-time heavyweight boxing champion who captivated millions of fans across the world with his mesmerizing combination of speed, grace and power in the ring, and charm and playful boasting outside of it. Ali insisted on being himself unconditionally and became a global icon and inspiration to people everywhere.

Hosts Earl Bridges and Craig Martin – longtime philanthropy veterans, globetrotters and best friends – trek around the world to meet people who are making a difference in their communities. In Season 2, they explore places close to home, like Virginia, South Carolina and Puerto Rico, and foreign destinations such as India and the Burmese border where the duo discovers inspiring change-makers and the limitless power of good.

The story of Luis, an undocumented Guatemalan boy who arrives in New York City with little support and many responsibilities, and Judy, a veteran ICE agent who must weigh the human cost of her work. More Latinx films in our Hispanic Heritage Month Viewer’s Guide.

The news often grabs our attention. But sometimes the story behind it is as interesting as the headlines. Tonight’s tellers share how making the news changed their lives. Phillip Martin navigates Civil Rights strife in Boston, Anne Stuart handles a local news phone line as Nixon’s White House collapses, and Jeff Howe gives a disastrous speech —with a very influential guest in the audience.

The coming-of-age story of DJ Savarese, a gifted writer and advocate for non-speaking autistics once considered a “profoundly disabled” foster kid. Deej’s story reveals what it takes to make the goals of “inclusion” and “disability rights” a reality.

Houston is the largest city in Texas —and the nation’s most ethnically diverse metropolitan area. As tonight’s stories will show, it’s also a city whose people have learned the fine art of resilience. Sneha Desai’s travels a difficult road from sickness to health. Actors and improv turn Brendan Bourque-Sheil’s playwriting lemon into lemonade. And Ebony Stewart learns the secret to taming her stress.

In their home countries, four LGBTQ+ people were targets of death threats, harassment and discrimination because of who they are, who they love. They are among the many LGBTQ+ refugees and asylum seekers who have fled persecution to resettle in the U.S. But as leadership continues to restrict the flow of refugees, they become desperate to find a safe place to call home.

After their son Zack, a gay teen, takes his own life, his parents – both conservative Republicans and military veterans from Norman, Oklahoma – are forced to reconcile their own social and political beliefs with their son's death.

Follow two best friends for a year and explore their unique, 30-year relationship, drawing on home videos and conversations with their eclectic cast of friends and family.

As part of PBS's Mysteries of Mental Illness, examine the obstacles that systemic inequality imparts on the mental health industry, preventing BIPOC and other marginalized communities from receiving appropriate treatment.

A quest to expose sexual exploitation and trafficking leads filmmaker Chelo Alvarez-Stehle to where her childhood ended and family secrets began. Documenting the transformation of a survivor, Chelo undertakes a journey of healing, setting out to shatter the silence about sexual abuse in her life.

Up Close and Personal | Stories from the Stage
Available online and on the Facebook, YouTube & PBS app

Everyone has their own personal space...but sometimes, we have to share it. Kurt Mullen finds space at a premium, even on the Appalachian Trail; Matthew Shifrin’s blindness creates a unique hands-on museum tour, and Meghann Perry connects with a friend despite her solitary confinement.

A missed connection doesn't necessarily mean loss; it could be a chance for redemption. While dating after having a mastectomy, Musu-Kulla Massaquoi finds a friend who likes her the way she is.

This Hispanic Heritage Month, WORLD Channel puts the spotlight on issues of inequity while celebrating the triumphs and joys of the Latinx community across borders through our collection of films.

June marks the celebration of PRIDE, a time to honor LGBTQIA+ trailblazers that represent owning your truth. During PRIDE Month, WORLD Channel shares stories of community leaders, friends, families and creators who take pride in themselves.

Article What to Watch on WORLD: July Films and Features

Watch films that explore the various states of democracy across the country.