Amplifying Black Voices: What to Watch During Black History Month 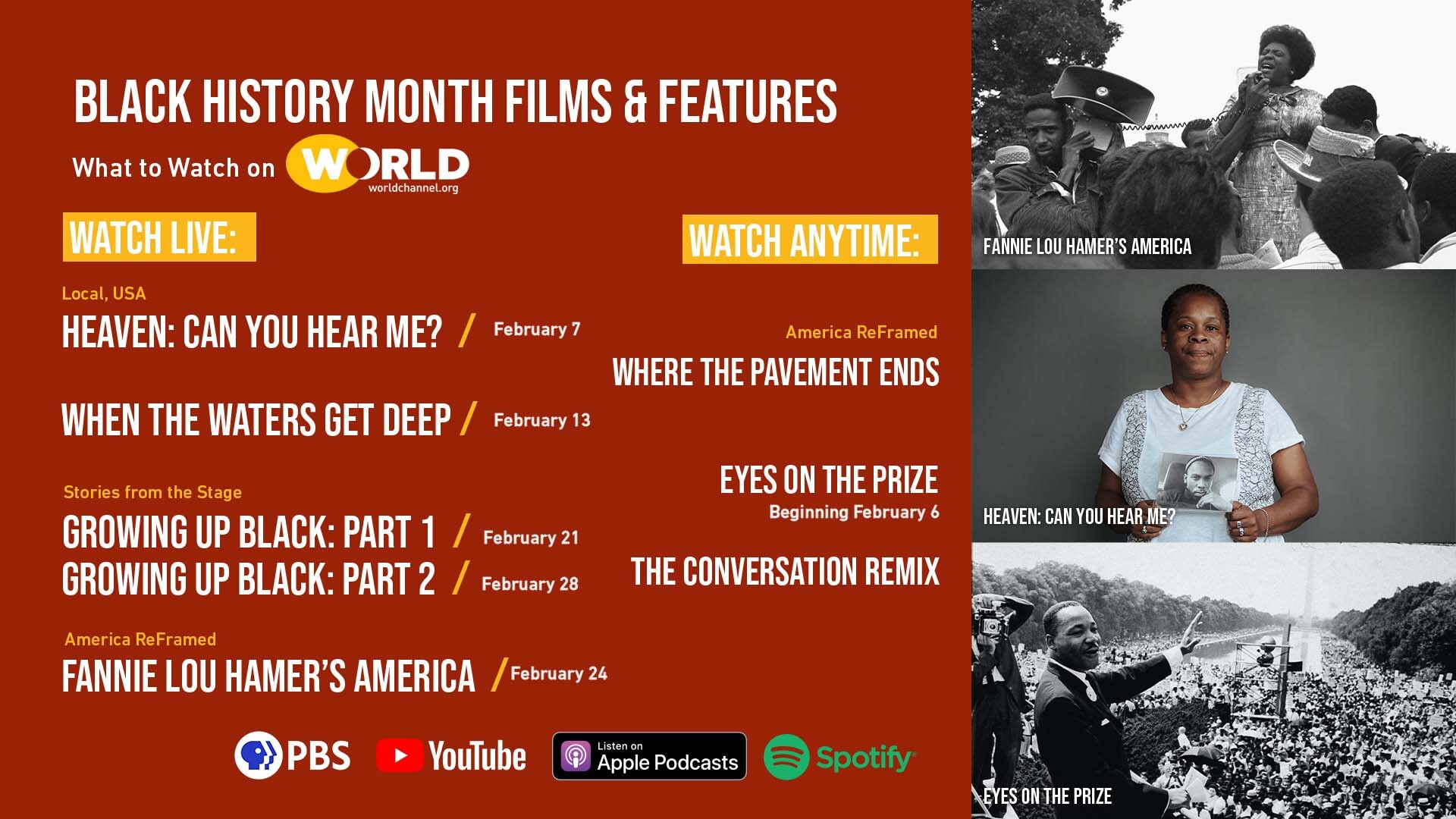 The United States has recognized February as Black History Month for just a few decades – but Black history in America extends far beyond its official designation in 1976 and the 28 days to celebrate and honor accomplishments of the Black community. Much progress is still to be made in recognizing this truth.

In 2020, the global pandemic opened the world’s eyes to issues that had been masked by our normalized routines. As awareness of healthcare disparities, police brutality and economic inequality for Black Americans came to the forefront, amplifying Black voices became part of national, local and dinner table conversations. This month, filmmakers bring authentic voices representing distinctive  perspectives to life on screen.

In the U.S., Black women, especially mothers and transgender women, are underserved, divested and underrepresented. ‘Fannie Lou Hamer’s America’ changes that narrative by amplifying one of America’s most influential but often misremembered Black female leaders and activists “in her voice, in words and song.” Other films like ‘Struggle & Hope’ and ‘Where the Pavement Ends’ shine a light on the realities and dreams of overlooked Black communities in rural America. And on Stories from the Stage, tellers share their experiences growing up Black in America.

By seeing and understanding these personal stories, the aim is to move forward into an America that recalls the past and rectifies its failures to ensure a future in which all voices are heard.

Following the Civil War, all-Black towns emerged in what is now modern-day Oklahoma. Initially founded in an effort to convince the U.S. to create an all-Black state, only a few towns cling heroically to life. STRUGGLE & HOPE gives voice to the stories of the last remaining residents, while charting their fight to ensure their towns retain independence, character and hope for a better future.

In 1969, the Chicago Black Panther Party formed alliances across ethnic and racial lines with other community-based movements in the city, including Latino group the Young Lords and southern whites the Young Patriots. Banding together in one of postwar America's most segregated cities to confront issues like police brutality and substandard housing, they called themselves the Rainbow Coalition.

Heaven: Can You Hear Me? | Local, USA

In Philadelphia, gun violence is the leading cause of death for young Black men. HEAVEN: CAN YOU HEAR ME? explores the impact on families through the eyes of mothers. The film demonstrates the challenges gun violence prevention advocates confront while allowing viewers to understand the often-untold trauma and resilience of survivors.

Where the Pavement Ends | America ReFramed

Examining the shared histories and deep racial divides affecting two Missouri towns. Through audio recordings, photographs and recollections of residents from what was then all-Black Kinloch and the all-white community of Ferguson, Ferguson native and director Jane Gillooly draws parallels between a 1960s dispute over a physical barricade erected between the towns and the 2014 shooting death by police of Michael Brown.

When the Waters Get Deep

WHEN THE WATERS GET DEEP is a musical journey through grief, love and hope, as the artists of Oakland-based SOL Development and BE-IMAGINATIVE disrupt cycles of trauma from gun violence and loss.

While I Breathe, I Hope | AfroPoP: The Ultimate Cultural Exchange

What does it mean to be young, Black, and a Democrat in the South?Follow South Carolina politician Bakari Sellers on his 2014 bid for lieutenant governor, through the Charleston shootings in 2015 to the present as he takes on a national role on CNN and considers his future in Trump’s America.

How does a father find purpose in pain? In 2014, Michael Brown Sr.’s son was killed by white police officer Darren Wilson in Ferguson, Missouri, an event that fueled the global Black Lives Matter movement. But his personal story seeking justice and healing has not been told until now.

Growing Up Black: Part 1 | Stories from the Stage

What does it mean to grow up Black in America, a country too often divided by race? It might mean strangers looking at you with suspicion, being pulled over by the police for no reason and/or being afraid to walk outside because of who you are. Bullied by a group of kids, Ben Cunningham finds out he is not alone; Susanne Schmidt shares the realities of raising kids of a different race; and Angie Chatman learns about how far we have come, and how far we have to go in a chance encounter she will never forget.

Fannie Lou Hamer's America is a portrait of a civil rights activist and the injustices in America that made her work essential. Through public speeches, personal interviews, and powerful songs of the fearless Mississippi sharecropper-turned-human-rights-activist, Fannie Lou Hamer's America explores and celebrates the lesser-known life of one of the Civil Rights Movement’s greatest leaders.

Growing Up Black: Part 2 | Stories from the Stage

In America, growing up Black means many things: cultural bonds, the struggle for visibility, and all too often, unearned judgement. Valerie Tutson teaches her students about Africa's greatest explorer, Abubakari II; U-Meleni Mhlaba-Adebo brings her son to a protest of George Floyd’s death; and Harold Cox shows how fear of the police affects his everyday life.

Available online & on the PBS app

In the South, vast amounts of African-American gravesites and burial grounds for enslaved persons have been disappearing over the years. In Virginia alone, stories of thousands at rest could vanish from history altogether if these locations are not restored. Those with personal connections to these burial sites have recently begun to uncover and maintain locations across the state. However, there is much work to be done in order to preserve this part of America’s history.

The History of White People in America

Through musical animated shorts, this Webby-nominated series examines how skin color has come to define race in our country. The shorts capture the truth of what it means to be American – that “us” and “them” are constantly redefined, that our racial history deserves contemplation, and that above all else we are bound by our rich differences in experience and identity.

Perspective is ever-changing, especially in the face of blatant injustice and widespread systemic inequities. In 2015, the New York Times presented A Conversation on Race, a series of short interviews about the role race plays in the American experience. The series was created following the killing of Michael Brown and renewed calls for justice the year prior.

Covering everyday topics like hairstyles and hair care, personal fashion and style, PROFESSIONAL BLACK GIRL is like a conversation with a woman you know, whether it is your homegirl, your sister, your auntie, or your mama. Each PBG shares her Black girl cultural experience, sharing personal stories and reflection.

Eyes on the Prize

Available online and on the PBS app Feb. 6 through Feb. 28 | Streaming on PBS Passport

Through contemporary interviews and historical footage, the landmark series, which recounts the fight to end decades of discrimination and segregation, traces the civil rights movement from the Montgomery bus boycott to the Voting Rights Act; from early acts of individual courage through the flowering of a mass movement and its eventual split into factions. Narrated by political leader and civil rights activist Julian Bond (1940-2015).

Article 'Elena': Resisting Anti-Blackness for a Place to Call Home

When the Dominican Republic strips citizenship for anyone with Haitian parents, young activist Elena becomes the face of the struggle to remain in the country built on the labor of her ancestors.

As the U.S. continues to fight COVID-19, vaccines have become the most efficient way of curbing the virus, but a hesitancy in Americans to get vaccinated threatens to delay the process.

Episode
Local, USA
Heaven: Can You Hear Me?