Cremation Is on the Rise in Black and Latino Communities During COVID-19, Funeral Professionals Say

In a still from the March 2020 documentary “Death Is Our Business,” an embalmer prepares a body in a New Orleans funeral home. Industry professionals say cremation is on the rise among Black and Latino families during COVID-19.

The way Black and Latino communities in the U.S. mourn their dead is changing. Burials, a cherished cultural tradition among these groups, have declined during the COVID-19 pandemic, funeral professionals say. Instead, more families of color are choosing cremation, citing economic hardship in a prolonged health crisis.

“We believe in a traditional burial, a traditional service,” said Baltimore funeral-home owner Hari Close, president of the Washington, D.C.-based National Funeral Directors and Morticians Association, which represents Black funeral service professionals. “Speaking historically, at the time of a person's life coming to an end, we celebrate their life. Because of this pandemic, we have shortchanged people for that celebration.”

Perhaps nowhere has this change been more apparent than in New Orleans, a city famous for its festive jazz funerals. The new documentary Death Is Our Business, a co-production from FRONTLINE, Firelight Media and WORLD Channel, directed by Jacqueline Olive and now streaming, looks at the pandemic’s impact on end-of-life celebrations in New Orleans.

Last year Johnson saw a 50% increase in demand for cremations from his Black customers compared to 2019. Before the pandemic, he offered funerals with all the bells and whistles. “We had the horse and buggy, the jazz funeral, the second line,” he said, referring to the horse-drawn hearses, brass bands, and lively processions typical of pre-COVID New Orleans. “But the pandemic cut all that out, just stripped it away,” he said.

In 2020 — a year that saw more than 350,000 deaths in the U.S. due to COVID-19, according to Johns Hopkins University — cremations were the most common form of final disposition for America’s dead. According to the Cremation Association of North America (CANA), 58% of U.S. deaths resulted in cremations during the first six months of the pandemic, a 3% increase from all of 2019. (Neither CANA nor the National Funeral Directors and Morticians Association tracks burials or cremations by race.)

That might not seem like a large increase, but Barbara Kemmis, CANA’s executive director, said it was notable, given that cremations only overtook burials in 2016.

“It wasn't until 1975 that the cremation rate in the United States was even 5 percent,” she said. “It took about a hundred years from the first cremation to become a significant form of disposition, legal and practiced in every state.”

The roots of the Black funeral industry in the U.S. date back to American slavery, when enslaved people prepared dead bodies, dug graves and tended cemeteries. During the Civil War, African Americans were tasked with recovering bodies from corpse-strewn battlefields. Following the war and emancipation, Black undertakers began to open funeral businesses in their own communities. Their services filled a need for mourners and for self-sufficiency, as Blacks were largely excluded from white cemeteries until the mid-20th century.

Now, in the midst of a pandemic, with some families pushed to financial limits, cremations have become a more affordable choice, Kemmis said. “Money is tight. People are out of work or can't work, whether they're just furloughed or unemployed,” she said. “You may have an unexpected death or, in some cases, multiple deaths in the same family.” 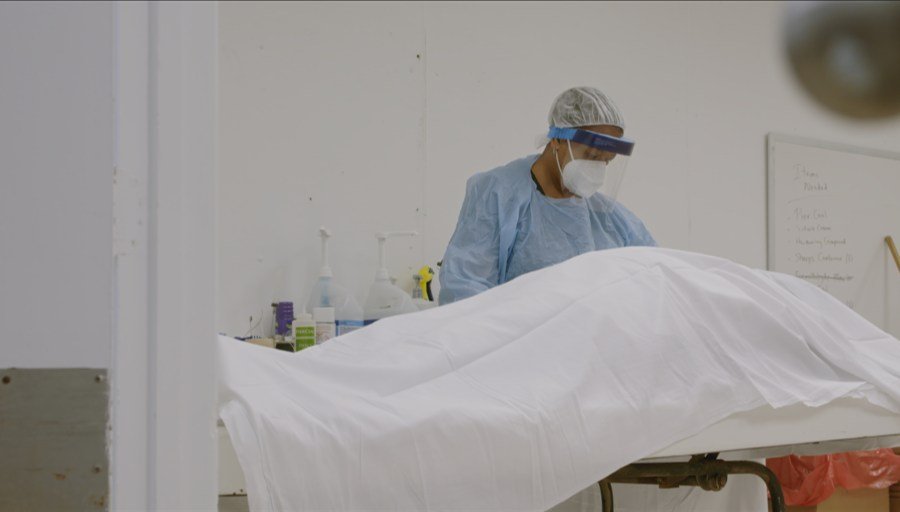 Funeral expenses during the pandemic, like the COVID-19 deaths associated with them, have been disproportionately borne by people of color across the country. The Color of Coronavirus Project, an initiative from American Public Media, reports that Black people are twice as likely to die from COVID-19 as whites in the U.S., while Latinos are 2.4 times more likely.

Beyond economics, some families in New York City, where the pandemic hit hard and early, may have chosen cremation at a time when it wasn’t clear how likely the virus was to spread from the deceased. “There was so much mixed information at the beginning of the pandemic,” said Francine Ross-Roden, owner of Ross-Roden Funeral Services in the Bronx. “They didn’t know how it passed from person to person.”

Like New Orleans and New York City before it, the city of El Paso, Texas, has seen COVID-19 cases spike in recent months. While Latinos make up more than 80% of the population of 700,000, they’ve accounted for 92% of the city’s COVID-related deaths.

Salvador Perches owns and operates funeral homes, including seven in the El Paso area and six others across the Rio Grande in Juárez, Mexico. “The Hispanic population is a little more traditional with burials,” said Perches, whose customer base is almost entirely Latino and Catholic. It wasn’t until 1963 that the Vatican lifted its ban on cremation.

Before the pandemic, about half of his customers chose cremation, Perches said. Now, that number is up to about 75%. “Even in Mexico, cremations have risen by a lot because of the pandemic, because we couldn’t have traditional services. Churches were closed. Families couldn’t travel,” he said. “The money situation was also a big issue. People couldn’t afford to do a burial.”

His business has adapted to offer traditional services alongside cremations. “More and more, we’re doing cremation with viewing hours,” Perches said. “You can have the viewing with the body present. And then you go to Mass the next day. You cremate later.”

Back in New Orleans, Johnson has resorted to pared-down versions of pre-pandemic funeral celebrations. “We can do the horse and buggy again,” he said, noting that some COVID restrictions have eased in recent months. “But the jazz and getting together for the second line — our mayor and council people, they want a controlled crowd.”

Once the pandemic winds down, pairing cremation with a traditional funeral service could become the city’s “new normal,” Johnson said, “because the cemetery prices are astronomical, and we don’t have enough space for everybody.” With roughly half of New Orleans lying below sea level, existing cemeteries are bursting with above-ground tombs, and there’s little real estate left for expansion. “We’re landlocked in the city,” Johnson said. “If you go further east, the only open area is wetlands. The water table is so high, you can’t bury deep enough.”

The Black funeral industry will continue to adjust, said Baltimore’s Hari Close — even when doing so cuts into profit margins.

“One thing we know: Death is going to come, and somebody has to help these families through,” Close said. “We know that we're in an economic challenge, in some of our markets. So, we have to be creative and still be able to help families keep their dignity.”

This story is part of a co-production from FRONTLINE, Firelight Media and WORLD Channel that includes the documentary Death Is Our Business, from filmmaker Jacqueline Olive. The film is now available for free streaming on WORLD Channel, at pbs.org/frontline,  and on the PBS Video App.

Episode
FRONTLINE
Death Is Our Business/Love, Life & the Virus

Article ‘Playing Russian Roulette With Our Own Lives’: At Black-Owned Funeral Homes in New Orleans, COVID Takes a Harsh Toll

Death is Our Business examines in intimate and moving detail how Black funeral homes in New Orleans have had to adapt to the devastating impact of COVID-19.