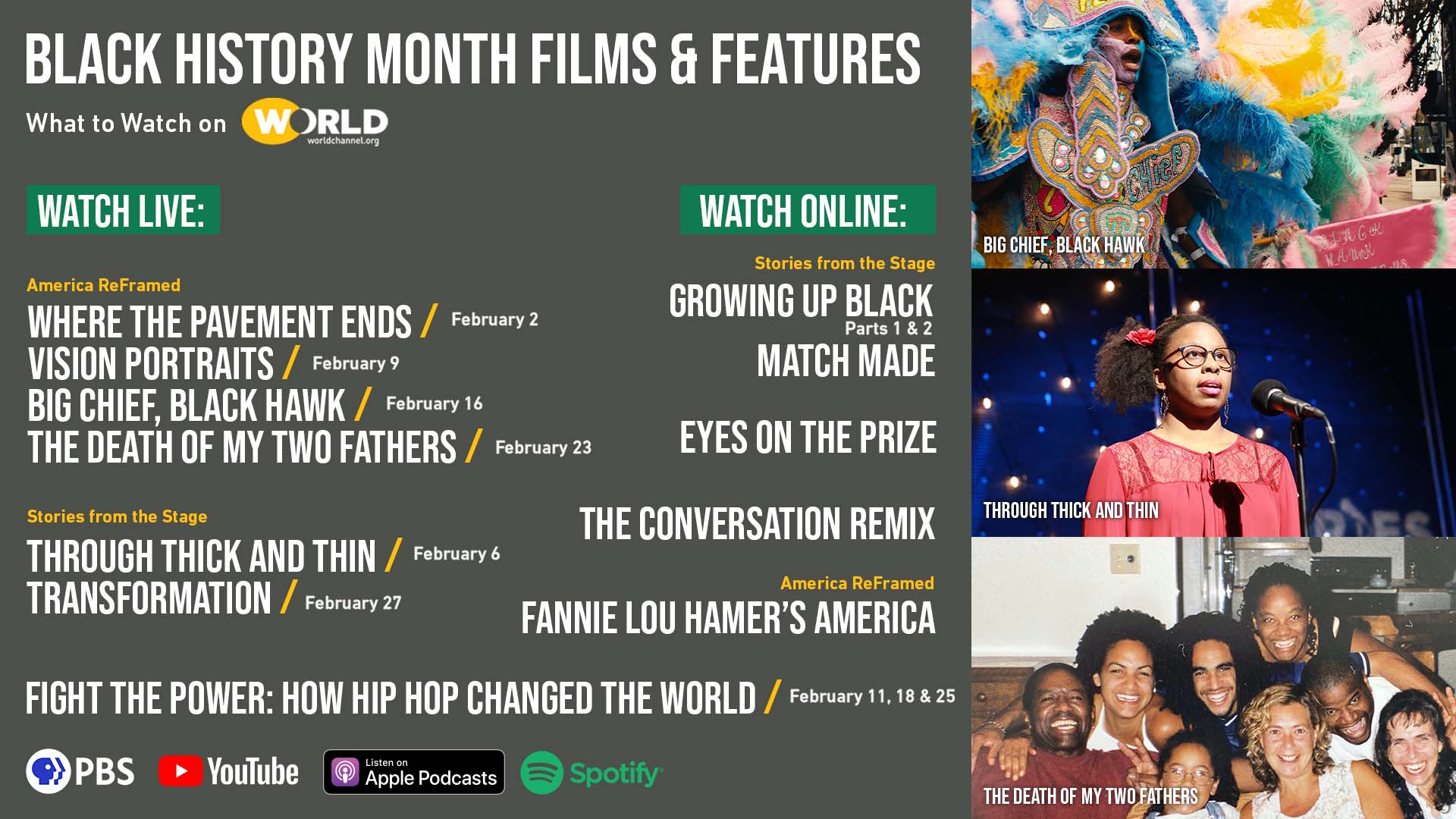 As Black History Month begins in February, we’re reminded to recommit to broadening our perspectives, creating space for Black voices and paying tribute to Black leaders and communities who’ve paved the way for freedom and equality.

America is built on history, specifically stories, passed down from generation to generation. Stories connect us to our roots – ancestry, traditions, and culture – while providing us the opportunity to learn, bear and expand on our revelations. Black history, interwoven in American life, is brimming with stories and has taught, and continues to teach, us how we progress with compassion and solidarity, and ensure that the complete story of our nation is carried on.

This month, documentaries on WORLD celebrate the stories – ones of adversity, triumphs, magic and joy – of Black Americans throughout history and share what it means to be Black in America – past, present and future.

Uncover the history of the Mardi Gras Indians and their culture and craft of masking in New Orleans for the season premiere of America ReFramed in Big Chief, Black Hawk, and explore how fatherhood, grief and reconciliation bridge together through one man’s story about Blackness, family and purpose in The Death of My Two Fathers. Plus, watch more films and limited series exploring the lives of Black vanguards from the likes of Fannie Lou Hamer, Madame C.J. Walker, Ernest Withers, Chuck D and many, many more.

The Picture Taker | Independent Lens
February 1 on TV, online & on the PBS app

The vibrant life of Ernest Withers – civil rights photographer, and FBI informant – was anything but black and white. From his Memphis studio, Withers' nearly 2 million images were a treasured record of Black history, but his legacy was complicated by decades of secret FBI service revealed only after his death. Was he a friend of the civil rights community, or enemy – or both?

Transporting viewers to Missouri towns – then all-Black Kinloch and the all-white community of Ferguson – and examining the shared histories and deep racial divides affecting both, the film draws parallels between a 1960s dispute over a physical barricade erected between the towns and the 2014 shooting death by police of Michael Brown through recordings, photographs and recollections.

Henry Louis Gates, Jr. traces the roots of actors Brian Cox and Viola Davis, uncovering records from workhouses in Scotland and slave plantations in South Carolina that reveal individuals who battled to build a better life for their families.

Heaven: Can You Hear Me? | Local, USA
February 6 on TV, online & on the YouTube & PBS apps

In Philadelphia, gun violence is the leading cause of death for young Black men. Explore the impact on families through the eyes of mothers, like one woman whose youngest of four sons was murdered. The film demonstrates the challenges gun violence prevention advocates confront while allowing viewers to understand the often-untold trauma and resilience of survivors.

NEW Through Thick and Thin | Stories from the Stage
February 6 on TV, online & on the PBS app

When faced with adversity, it's easy to believe that the universe is conspiring against us. However, the lessons we learn last a lifetime. Linda learns the difference between curses and kindness; ToRena works to recover economically after the 2008 crash; and Marlon uses comedy to lessen the pain of war. Hosted by Theresa Okokon.

Outta the Muck | Independent Lens
February 8 on TV, online & on the PBS app

Wade into the rich soil of Pahokee, FL, a town on the banks of Lake Okeechobee. Beyond its football legacy, including sending over a dozen players to the NFL (like Anquan Boldin, Fred Taylor and Rickey Jackson), the fiercely self-determined community tells their stories of Black achievement and resilience in the face of tragic storms and personal trauma.

Acclaimed director Rodney Evans takes viewers on a personal journey as he ponders how the deterioration of his vision will impact his life and work as a filmmaker. Interviewing blind and low vision artists – a photographer, a dancer and a writer – Evans embarks on a quest to learn how other artists have continued to create art and how their journeys might serve as inspiration for his own.

Chuck D of Public Enemy explores hip hop’s political awakening over the last 50 years. With a host of rap stars and cultural commentators, he tracks hip hop’s socially-conscious roots. From The Message to Fight The Power 2020, he examines how hip hop has become "the Black CNN."

Love in the Time of Fentanyl | Independent Lens
February 15 on TV, online & on the PBS app

As deaths in Vancouver, Canada reach an all-time high, the Overdose Prevention Society – a renegade supervised drug consumption site that employs active and former drug users – opens its doors. Its staff and volunteers do whatever it takes to save lives and give hope to a marginalized community in this intimate documentary that looks beyond the stigma of people who use fentanyl and other drugs.

Big Chief Tee is a high school senior and the youngest Mardi Gras Indian Big Chief in New Orleans. During COVID-19, he and the Black Hawk Hunters navigate the impacts of gentrification and systemic racism on their annual masking tradition. Through haute couture, movement and words, the film celebrates the beauty and resilience of “the culture” even in the face of crisis and change.

An intimate look at Pastor James Lawson, who has been called “the leading non-violent theorist in the world,” and Attorney Bryan Stevenson, oft referred to as “America’s Gandhi.” The two men, generations apart, are both iconic figures at the vanguard of America’s peace and justice movement.

NEW The Death of My Two Fathers | America ReFramed
February 23 on TV, online & on the PBS app

After 20 years, Sol Guy finally watches his late father’s tapes and embarks on a personal journey of healing and reconciliation. At once a conversation between past and present and a letter to Sol’s children, the film reveals the complexities of identity, the persistence of racial trauma, the challenges of fatherhood – and the liberation that exists in facing our own mortality.

NEW Transformation | Stories from the Stage
February 27 on TV, online & on the PBS app

We often believe that our circumstances are permanent, when in fact, this is not the case. If only we dare, change can happen. Jason Prokowiew discovers his voice and sees himself in a new light; Jackie Davis embarks on a daring career change that leads to joy; and Judah Leblang changes his name and learns to trust his inner voice. Hosted by Wes Hazard.

A portrait of a civil rights activist and the injustices in America that made her work essential. Through public speeches, personal interviews and powerful songs of the fearless Mississippi sharecropper-turned-human-rights-activist, the film explores and celebrates the lesser-known life of one of the Civil Rights Movement’s greatest leaders.

The Conversation Remix
Available online, on YouTube & on the PBS app

Exploring the present catharsis following the death of George Floyd, we dive into how the current uprising is impacting communities, and how we can contribute to discussions about racial justice reform. This remix of the 2015 'A Conversation about Race' series is a vibrant collage of people’s lives and experiences, which powerfully frame and illustrate the reckoning that is happening around us.

Match Made | Stories from the Stage
February 13 on TV | Available online & on the Facebook, YouTube & PBS apps

The search for a life partner is usually far from perfect – bad choices, parental pressure and twists & turns are all part of the journey. Tae crosses cultural barriers to find love; Diane turns to a how-to book to find her ideal partner; and Kevin fights to overcome his fear of marriage and finally tie the knot. Hosted by Theresa Okokon.

What does it mean to grow up Black in America, a country too often divided by race? It might mean strangers looking at you with suspicion, being pulled over by the police for no reason and/or being afraid to walk outside because of who you are. Bullied by a group of kids, Ben Cunningham finds out he is not alone; Susanne Schmidt shares the realities of raising kids of a different race; and Angie Chatman learns about how far we have come, and how far we have to go in a chance encounter she will never forget. Hosted by Wes Hazard. Winner, 2021 Webby Awards, Virtual & Remote: Arts & Culture.

Growing Up Black: Part 2 | Stories from the Stage
February 20 on TV | Available online & on the Facebook, YouTube & PBS apps

Growing up Black in America means cultural bonds, the struggle for visibility, and all too often, unearned judgment. Valerie teaches her students about Africa's greatest explorer; U-Meleni brings her son to a protest of George Floyd’s death; and Harold shows how fear of the police affects his everyday life. Hosted by Theresa Okokon.

When MC Karega Bailey loses his brother in a shooting, his grief makes him sick with revenge and hopelessness, and he is left questioning his own message of hope and peace. Turning to his faith, family and writing, Bailey finds his voice and purpose again – with the collective BE-IMAGINATIVE, the four members of SOL help lead healing circles and musical experiences for mothers whose children have been taken by gun violence.

Telling the definitive story of the civil rights era from the point of view of the ordinary men and women whose extraordinary actions launched a movement that changed the fabric of American life, and embodied a struggle whose reverberations continue to be felt today. Narrated by political leader and civil rights activist Julian Bond (1940-2015).

The late Gloria Allen, a Black trailblazing transgender activist, started a charm school for homeless trans youth and is now aging with joy and grace. The film is a story of a mother’s love – the love that Gloria’s mother had for her and the love that Gloria has for her chosen children.

The biography of Madame C.J. Walker, America's first self-made millionairess. Mrs. Walker's fortune was built on skin and hair care products, parlaying a homemade beauty formula into a prosperous business from coast to coast. By interweaving social, economic and political history, the film also offers a view of black America from 1867 to the 1930s.

In honor of Rev. Dr. Martin Luther King, Jr., who worked tirelessly to bring equality and justice to Black Americans, we remember and reflect on his many poignant messages through stories that represent both a lasting legacy and a need for his mission to continue every day.