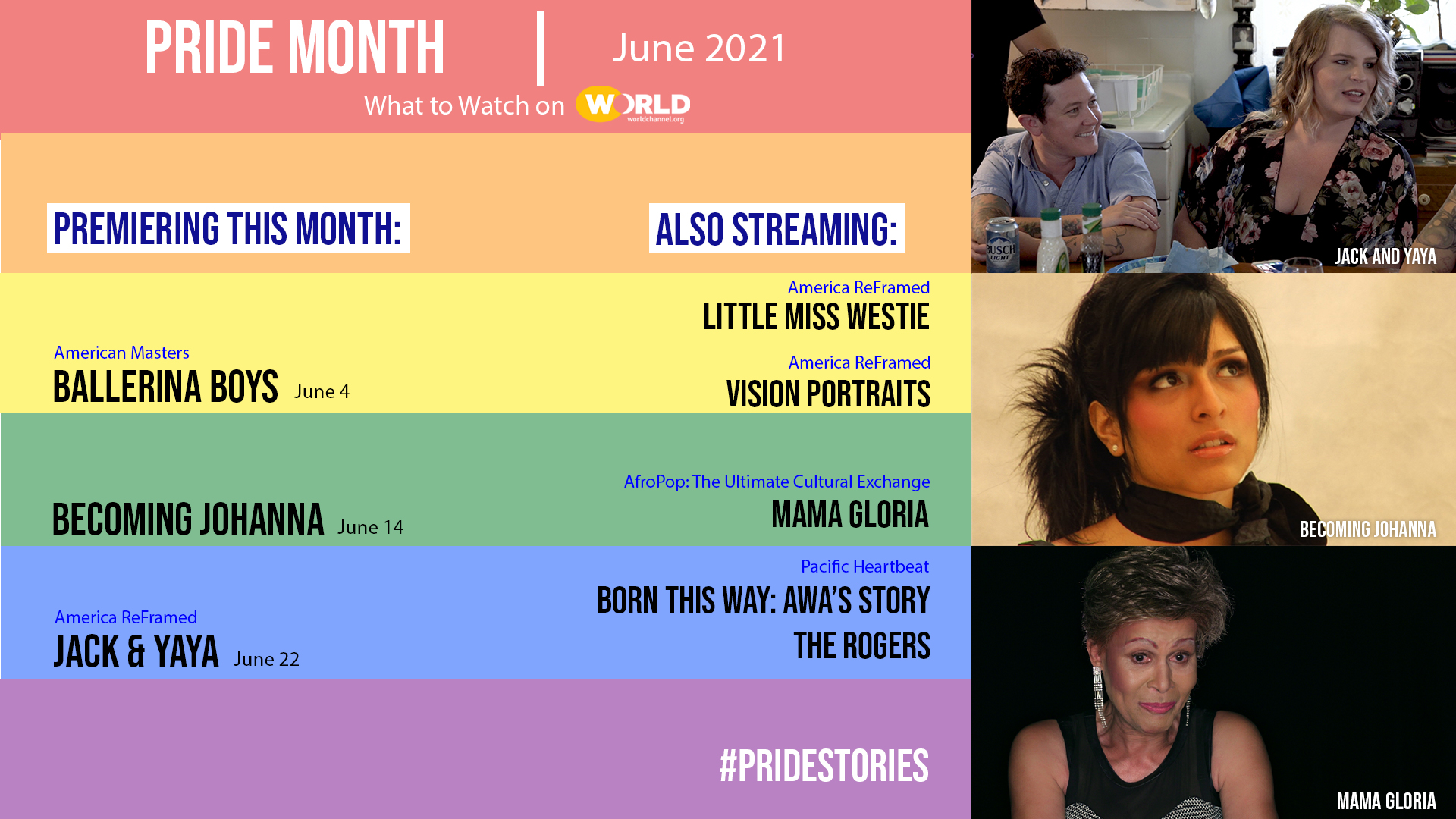 June is Pride Month, and in support of and advocacy for the LGBTQIA+ community, WORLD Channel is ready to celebrate with the sweet freedom of authenticity.

Two transgender best friends look back on their 30 years of friendship, while “Mama Gloria” Allen invites us into the home she’s built for LGBTQIA+ youth. Through family, community, courage and kindness, WORLD champions the beauty of what it means to stand proudly for who we are.

Discover Les Ballets Trockadero de Monte Carlo, or, simply, The Trocks. For 45 years, this all-male company has offered audiences their passion for ballet classics, mixing artistry with exuberant comedy. With every step they poke fun at their strictly gendered art form.

BECOMING JOHANNA tells the story of a 16-year-old Latina transgender teenager living in Los Angeles who is taken into foster care when her religious, immigrant mother refuses to accept her transition to a young woman.

Follow two best friends for a year and explore their unique, 30-year relationship, drawing on home videos and conversations with their eclectic cast of friends and family.

Out in Rural America
Watch June 22 on TV & YouTube

Following five stories from the LGBTQ+ community over six years, the film explores the issues of self-doubt, discrimination, acceptance, and small-town and Midwestern LGBTQ+ life from a cultural, social, familial, and religious perspective.

A loving and insightful portrait of two transgender siblings and their parents. As the children begin living in their authentic genders, the family navigates puberty, school and the Lil’ Miss Westie Pageant.

Director Rodney Evans ponders how the deterioration of his vision will impact his life and work as a filmmaker. He embarks on a quest to learn how other artists have continued to create and how their journeys might serve as inspiration for his own.

Gloria Allen, a trailblazing Black transgender activist who started a school for homeless trans youth, is aging with joy and grace. This is the story of a mother’s love – a love that director Luchina Fisher has for her transgender daughter, Gia.

In Norman, Oklahoma, gay teen Zack Harrington killed himself with a gunshot to the head. His parents, conservative Republicans and military veterans, are forced to reconcile their own beliefs with their son's death.

Pacific Heartbeat | Watch Online & on the PBS app until June 7

In New Zealand, Te Awarangi ‘Awa’ Puna is an openly transgender Maori teen attending her final year at Kapiti College. This film follows her journey from male to female as we see the support and the hurdles she must overcome.

An intimate glimpse into the lives of those who formed the first visible group of transgender men in the Pacific Islands: the Rogers of Samoa. While continuing to face many obstacles, their stories illustrate the power that come when those rejected by society create their own community.

ALABAMA BOUND chronicles the roller-coaster ride for gay rights in the South, and a resilient community that lives with both frustration and hope in a place where the line between church and state is often blurred.

As leadership in America continues to demonize immigrants and restrict the flow of refugees into the U.S., UNSETTLED: SEEKING REFUGE IN AMERICA humanizes a group of four LGBTQ+ refugees and asylum seekers who are desperately trying to find a safe place to call home.

Want more? Explore our PRIDE STORIES collection page for more films and features to watch in celebration of Pride Month.

This June, WORLD Channel is sharing stories of community leaders, friends, families, and creators who take pride in themselves.