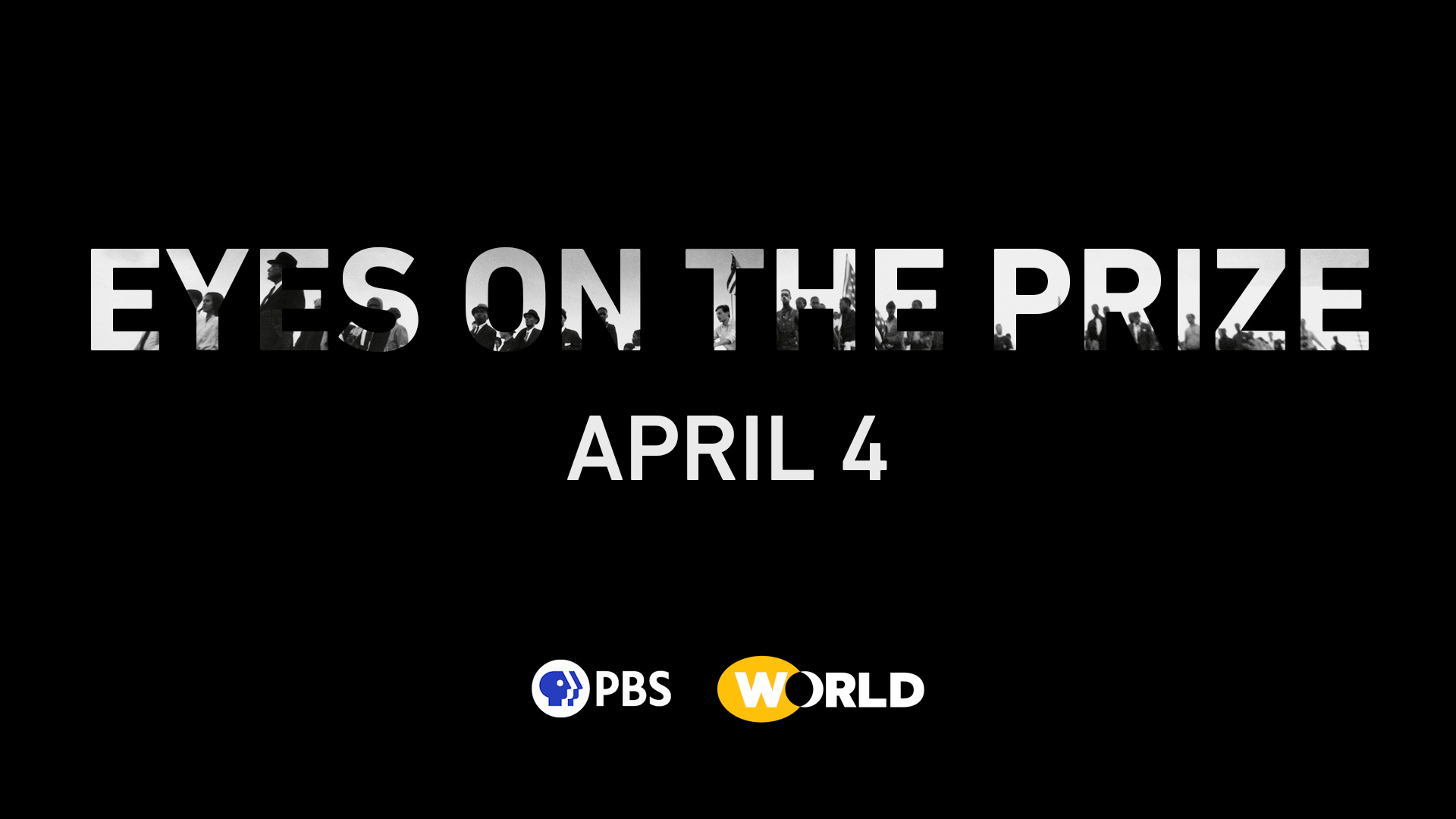 Boston, MA (March 25, 2021) – WORLD Channel, a national public media broadcast, online and social media platform with news and documentaries humanizing complex issues from across the globe, is teaming up with PBS to bring back Eyes on the Prize, the iconic history series on race in America. The 14-part series will begin airing Sunday, April 4, 2021 at 9 p.m. ET, on WORLD Channel, and will be available to PBS member stations nationwide beginning April 10, 2021 (check local listings).

For the first time, Eyes on the Prize I, the first six episodes of the two-part series, will also be available for catch-up streaming, free and for a limited time beginning April 10th, following the broadcast on WORLD Channel on all station-branded PBS platforms, including WORLDChannel.org, PBS.org and the PBS Video app. PBS station members can also view Eyes on the Prize I via PBS Passport.

WORLD and PBS will host national online events to discuss themes in the series and connect audiences to how those themes impact our society today. Individual episodes will also be included in PBS’ At-Home Learning schedule, which was created in response to the pandemic. Airing nationwide on WORLD Channel, At-Home Learning programs for students grade 6-12 are broadcast daily, Monday through Friday, from 12:00pm to 5:00pm EST / 9:00am to 2:00pm PST.

At-Home Learning broadcasts will be supplemented with additional resources from PBS LearningMedia, a free service that includes thousands of contextualized learning materials aligned to state and national standards. PBS LearningMedia will offer a host of educational offerings for middle and high school teachers related to Eyes on the Prize. The Civil Rights: Then and Now collection includes video clips, activities, discussion questions and lesson plans.

“When first broadcast in 1987, Eyes on the Prize was acclaimed as the defining series on race in America. Today, it still resonates and is relevant to an entirely new generation of those seeking answers about how we arrived at this moment in our country,” said Chris Hastings, executive producer for WORLD Channel, which is produced at GBH in Boston. “As we mark the anniversary of the death of civil rights leader Dr. Martin Luther King, Jr., and at a time when racism continues to be at the forefront of the national dialogue, we are proud to share this series.”

“As we continue to provide our viewers with relevant content across PBS platforms, this iconic series represents a unique opportunity to deliver on our mission to educate, inspire, entertain and express a diversity of perspectives. Today, more than ever, it is critical that public media helps to inform generations about early Civil Rights pioneers and how their work continues today,” said Sylvia Bugg, Chief Programming Executive and General Manager, General Audience Programming at PBS. “We are proud to partner with WORLD Channel to bring this series back to the forefront and to inspire dialogue across communities and through our education efforts.”

Eyes on the Prize, created by Executive Producer Henry Hampton, is an award-winning and critically-acclaimed in-depth documentary series on civil rights in America. Hampton set out to share his vision of what he called “the remarkable human drama that was the Civil Rights Movement” through the experiences and challenges of those fighting for justice. Produced by Blackside Inc, Eyes on the Prize tells the definitive story of the civil rights era from the point of view of the ordinary men and women whose extraordinary actions launched a movement that changed the fabric of American life and embodied a struggle whose reverberations continue to be felt today.

With contemporary interviews and historical footage, the Academy Award-nominated documentary traces the civil rights movement from the Montgomery bus boycott to the Voting Rights Act; from early acts of individual courage through the flowering of a mass movement and its eventual split into factions. The late Julian Bond, political leader and civil rights activist, narrates.

Eyes on the Prize won numerous awards including the duPont-Columbia Gold Baton Award, Peabody Awards in 1988 and 1991, and it was nominated for an Academy Award for Best Documentary Feature.

In conjunction with the program’s return to broadcast, the American Archive of Public Broadcasting (AAPB) will release a new online exhibit -Freedom Song: Interviews from Eyes on the Prize: America’s Civil Rights Years, 1954-1965 that explores the history behind and making of the groundbreaking civil rights series Eyes on the Prize. Using unedited interviews recorded for the series, as well as an interactive map of locations central to the Civil Rights Movement and a timeline of critical events, the Freedom Song exhibit breathes new life and context into the epic series. The exhibit was curated by Michelle Kelley, a cinema studies scholar who worked with students on the Eyes on the Prize interviews as a postdoctoral teaching fellow at Washington University in St. Louis.

This special presentation of Eyes on the Prize is made possible with the generous support of the Corporation for Public Broadcasting and PBS viewers.

About WORLD Channel
WORLD shares the best of public media in news, documentaries and programming. WORLD’s original series examine the issues and amplify the voices of those often ignored by mainstream media. The multicast 24/7 channel helps audiences understand conflicts, movements and cultures from around the globe. Its original work has won a Peabody Award, an Alfred I. duPont-Columbia Award, a National News and Documentary Emmy Award and many others honoring diversity of content and makers. WORLD is carried by 176 member stations in markets representing over 70% of US TV households. Funding for WORLD Channel is provided by the Corporation for Public Broadcasting, the John D. and Catherine T. MacArthur Foundation, Wyncote Foundation, the National Endowment for the Arts and Artworks, WORLD member stations and direct donations from the public. WORLD is produced by GBH in partnership with WNET and is distributed by American Public Television (APT). Find out more at WORLDChannel.org and follow WORLD Channel on Facebook, Twitter, Instagram and YouTube.

ABOUT BLACKSIDE
Founded in 1968 by Henry Hampton, Blackside, Inc. went on to become one of the nation’s most acclaimed documentary film companies. Blackside producers are renowned for shaping the human stories behind the history into compelling films that inspire dialogue on the social and political issues at the core of American life. Producing more than sixty major film and media projects, Blackside has provided many emerging filmmakers with the opportunity to learn their craft. Eyes on the Prize, the company’s definitive history of the civil rights movement, won the dupont-Columbia Gold Baton, Peabody Awards, an Academy Award nomination, and numerous Emmys. Blackside has also brought many other award-winning productions to public television, including The Great Depression, Malcolm X: Make It Plain, America’s War on Poverty, This Far by Faith, and I’ll Make Me A World. Eyes on the Prize is a production of Blackside, Inc. and was created and executive produced by Henry Hampton (1940-1998). Judi Hampton now serves as president of Blackside.

ABOUT PBS
PBS, with more than 330 member stations, offers all Americans the opportunity to explore new ideas and new worlds through television and digital content. Each month, PBS reaches over 120 million people through television and 26 million people online, inviting them to experience the worlds of science, history, nature and public affairs; to hear diverse viewpoints; and to take front row seats to world-class drama and performances. PBS’s broad array of programs has been consistently honored by the industry’s most coveted award competitions. Teachers of children from pre-K through 12th grade turn to PBS for digital content and services that help bring classroom lessons to life. Decades of research confirms that PBS’s premier children’s media service, PBS KIDS, helps children build critical literacy, math and social-emotional skills, enabling them to find success in school and life. Delivered through member stations, PBS KIDS offers high-quality educational content on TV - including a 24/7 channel, online at pbskids.org, via an array of mobile apps and in communities across America. More information about PBS is available at www.pbs.org, one of the leading dot-org websites on the internet, or by following PBS on Twitter, Facebook or through our apps for mobile and connected devices. Specific program information and updates for press are available at pbs.org/pressroom or by following PBS Pressroom on Twitter.

Eyes on the Prize

EYES ON THE PRIZE tells the definitive story of the civil rights era from the point of view of the ordinary men and women whose extraordinary actions launched a movement that changed the fabric of American life, and embodied a struggle whose reverberations continue to be felt today.

Individual acts of courage inspire Black Southerners to fight for their rights.