Celebrating Women and Their Stories on WORLD 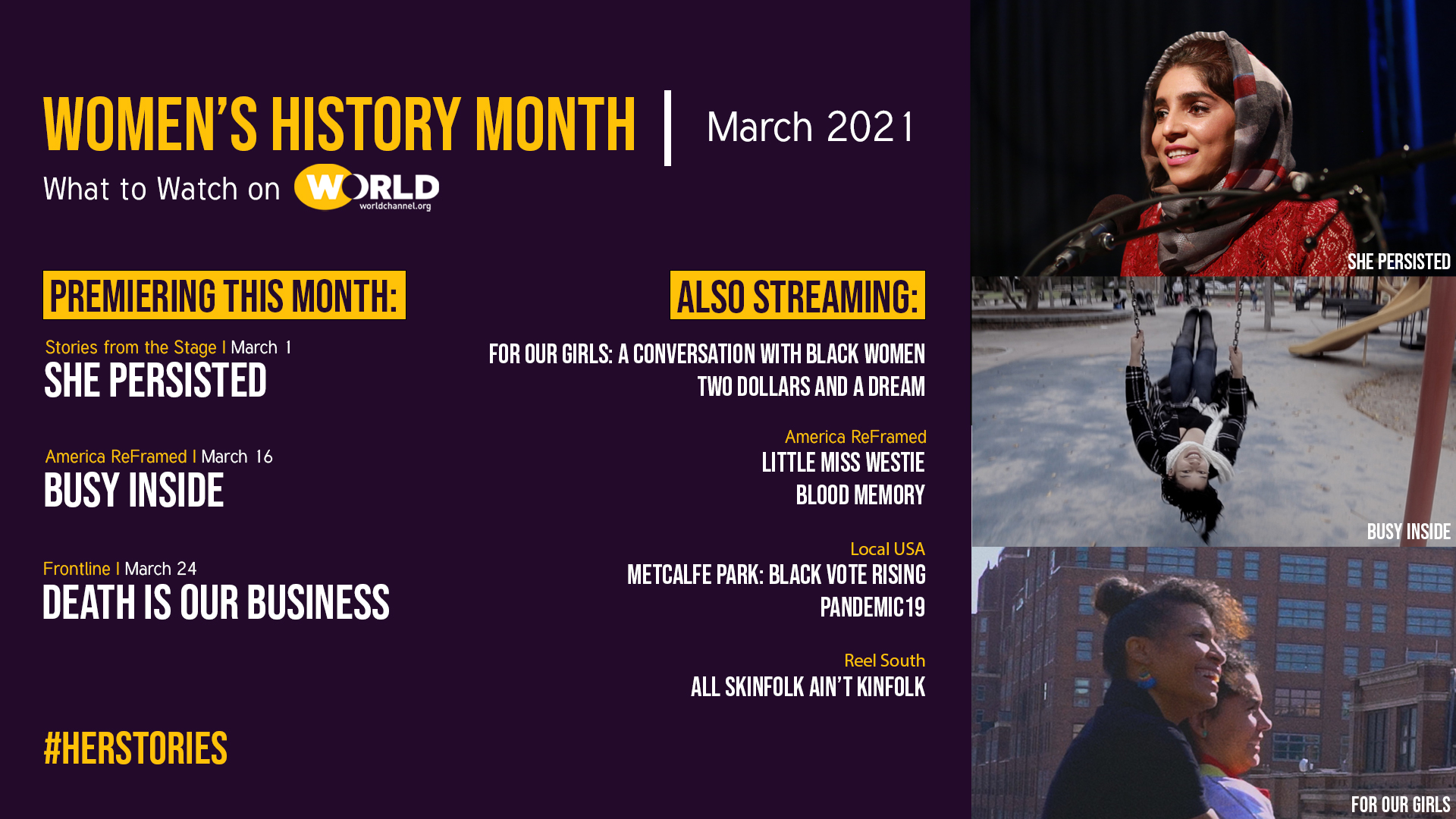 In a year of the unexpected, we are surrounded by women who are persevering through one of the most difficult times for mothers, daughters and sisters. Yet they continue to make it their life's mission to open the doors for the generations to come. In March, WORLD shares the stories of women and girls who have defied social norms for the opportunity at equality with films by and about women.

She Persisted
Stories from the Stage | March 1 on TV, Online, YouTube & the PBS app

Through the whispers of doubt, nevertheless, they persisted. Three women, three stories, three interpretations of SHE PERSISTED.

A respected therapist specializing in the treatment of Dissociative Identity Disorder (DID), and her patients, confront past trauma and embrace their different personalities.

The Place That Makes Us
America ReFramed | March 30 on TV, Online
& the PBS app

Set in Youngstown, Ohio years after the closure of its steel mills, follow a new generation of young leaders and community activists working to revitalize their hometown.

Exploring the stigmas Black girls face as they grow up within and outside their community. A love letter to Black daughters, mothers share their concerns with how they are shaping and impacting their daughters’ independence.

Blackfeet warrior Elouise Cobell's relentless pursuit of justice led her to find remedy for over half a million Native American account holders whose funds were held by the U.S. government in trust for a century.

The personal is political. This portrait of the artist reveas her uncompromising life as she raised her voice in the name of black culture, civil rights, women's liberation, and world peace.

Tracing Monique Verdin’s quest to find a place in her Native American community as it suffers from decades of environmental degradation. Monique must overcome losses and redefine the meaning of home.

On January 20th, 2020, the first COVID-19 case was diagnosed in the U.S. With video diaries, follow three brave doctors working to save lives during the first wave, encapsulating the historic times in which we live.

Opioids from Inside
Local, USA | Watch Online & the PBS app

Follow three women who have served time in jail for opioid-related crimes. These women are not simply addicts, they are mothers & daughters, abusers & victims, but most of all, they are humans.

Set during the Obama era, Katy and John, two Tea Party activists from the battleground state of Pennsylvania, believe America's salvation rests in a return to true conservative values.

The biography of Madame C.J. Walker, America's first self-made millionairess. Her fortune was built on skin and hair care products, parlaying a homemade beauty formula into a prosperous business.

Want more? Explore our March viewing guide for more films and features to watch throughout the month.