What to Watch on WORLD: November 2021 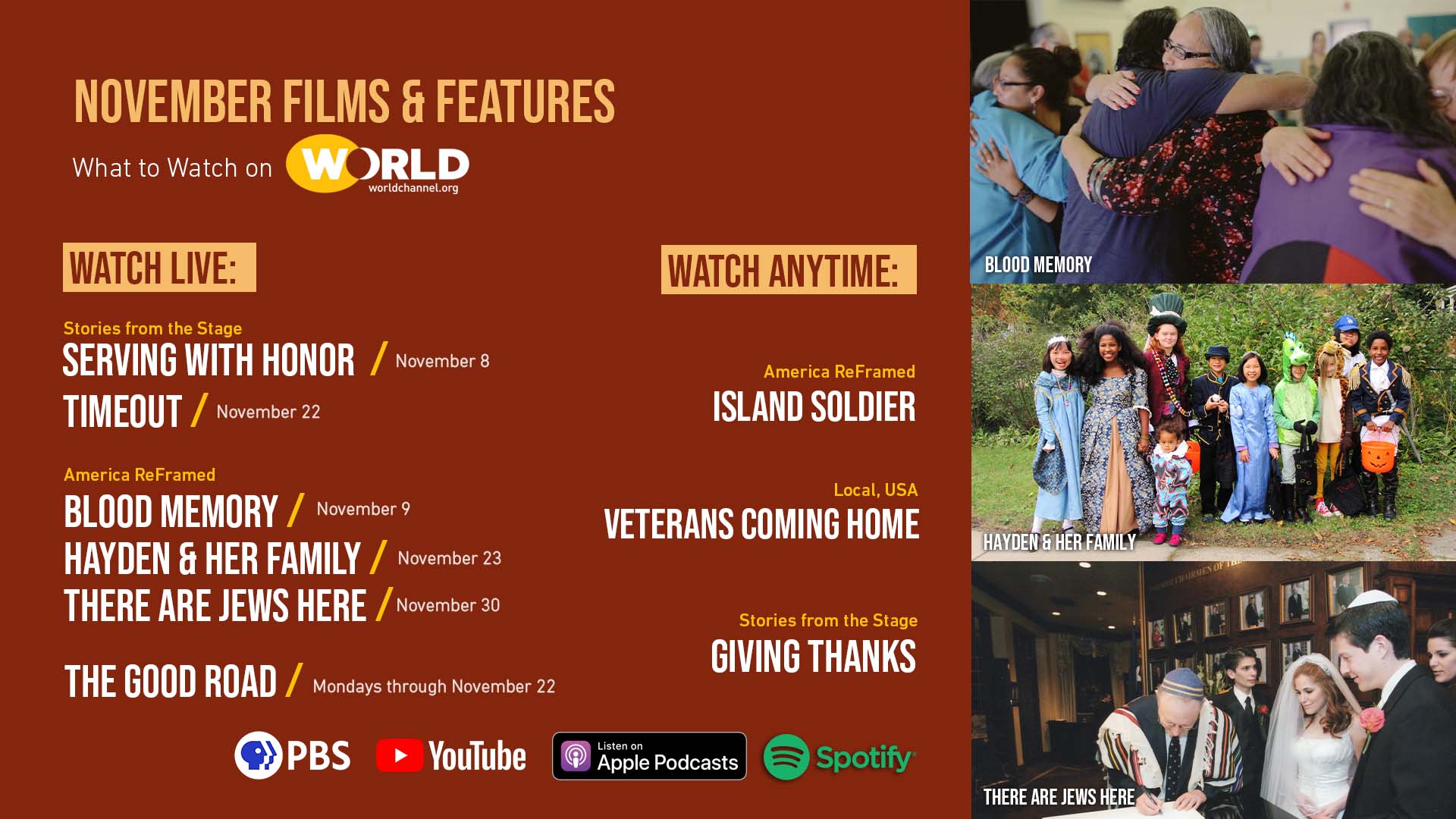 As the year nears its close, family, community and service become top of mind. In November, which is Native American Heritage Month, Indigenous peoples and their culture are honored and celebrated while providing an opportunity to acknowledge their turbulent American history. During the month, on November 11th, Americans recognize the magnificent sacrifice and continued contributions of veterans on Veterans Day, once known as Armistice Day of 1918. And as Hanukkah begins on the evening of the 28th, coming together becomes an invaluable part of our collective experience.

Films to watch in November feature stories reflecting on unity: storytellers share stories of service for this country and its people; small towns look for community amid dwindling religious spirit; and a young girl and her adoptive parents and new siblings navigate their special needs and family dynamics.

On a Knife Edge | America ReFramed
Nov. 2 on TV | Available online & on the PBS app through Dec. 2

The coming-of-age story of George Dull Knife, a Lakota teenager growing up on South Dakota’s Pine Ridge Reservation. George joins the American Indian Movement in protesting the liquor stores, and his growing political awareness leads him on a collision course with the police and the reservation’s tribal council.

NEW: Serving with Honor | Stories from the Stage
Nov. 8 on TV, online and on the Facebook, YouTube & PBS apps

Service members and their families demonstrate their character and resolve in the most trying of circumstances. As a case manager working with refugees, former military Kevin Dutremble challenges his assumptions about others; after penpalling her brother’s Navy buddies, Juli-anne Whitney Jensen understands the impact of her letters; and James Griffin tries to connect with his brother killed in the Vietnam War.

At 18 months of age, Sandy was removed from her Sicangu Lakota relatives and placed with white missionaries over 400 miles from the reservation. After a 30-year struggle through abuse and recovery, Sandy sets out to restore the missing pieces of her stolen past and reclaim the Sicangu Lakota identity she was taught to disown.

Six Native American women reclaim personal and tribal sovereignty in the face of sexual assault with their stories that shine an unflinching light on righting injustice on both an individual and systemic level.

NEW: Timeout | Stories from the Stage
Nov. 22 on TV, online and on the Facebook, YouTube & PBS apps

For most people, playing sports is about meeting personal challenges – from first tries on the field to last hurrahs on the sidelines, in the thick of it all. Andrew Shelffo dreams of throwing a whiffle ball no-hitter; Kioko Mwosa signs up for the Memory Ride; and Sophie Wadsworth and her sister become the first girls to play tackle football on a private all-boys team in 1970s New York City. Three stories, three interpretations of TIMEOUT, hosted by Wes Hazard.

The Currys adopt Hayden, and four other special needs children, into their home. Follow Hayden as she, her new siblings and parents navigate the complexity, jealousies and joy of becoming a family.

There Are Jews Here | America ReFramed
Nov. 30 on TV | Available online & on the PBS app starting Nov. 28 through Dec. 6

Follow the untold stories of four once-thriving American Jewish communities that are now barely holding on in this affecting portrait of people who are doing their part to keep the Jewish spirit alive in smalltown America.

The Good Road
Mondays on TV through Nov. 22

Hosts Earl Bridges and Craig Martin – longtime philanthropy veterans, globetrotters and best friends – trek around the world to meet people who are making a difference in their communities. In Season 2, they explore places close to home, like Virginia, South Carolina and Puerto Rico, and foreign destinations such as India and the Burmese border where the duo discovers inspiring change-makers and the limitless power of good.

Follow the Nena family as they grieve the loss of their son - his death in Afghanistan makes waves through the community where nearly everyone is connected to the U.S. military. Known as a "recruiter's paradise," Micronesia contributes a disproportionate number of soldiers to the armed forces, who cannot receive benefits...yet young men leave their families behind in pursuit of the American Dream.

Giving Thanks | Stories from the Stage
Nov. 29 on TV | Available online, on YouTube & on the PBS app

Favorite stories about Thanksgiving, the holiday that has us giving thanks. Lani Peterson’s cooking mistake becomes a family secret; Melanée Addison tests her adulthood through the ultimate challenge: the Thanksgiving turkey; and Matthew Dicks gathers his courage to stand up to his girlfriend’s tough-as-nails dad.

Highlighting the challenges veterans – those with physical and/or mental wounds – face in transitioning from military to civilian life. Stories include a program training both veterans and shelter dogs who are working together to combat the effects of PTSD, Traumatic Brain Injury and Military Sexual Abuse; and the recovery of a veteran from after he was physically injured to today as a Taekwando Grandmaster.

Showcasing veterans finding new career paths and adapting to the civilian work world. Stories include the successes and stumbling blocks of a post-military career, and how a former Rear Admiral is using her leadership skills to save her community from rising waters.

Explore films that honor the Indigenous experience in America with our Native American Heritage Month Viewer's Guide and Collection.

During Native American Heritage Month, watch films that explore what it means to be Native in today’s America.

In THE GOOD ROAD, hosts Earl Bridges and Craig Martin trek around the world to meet people who are making a difference in their communities.