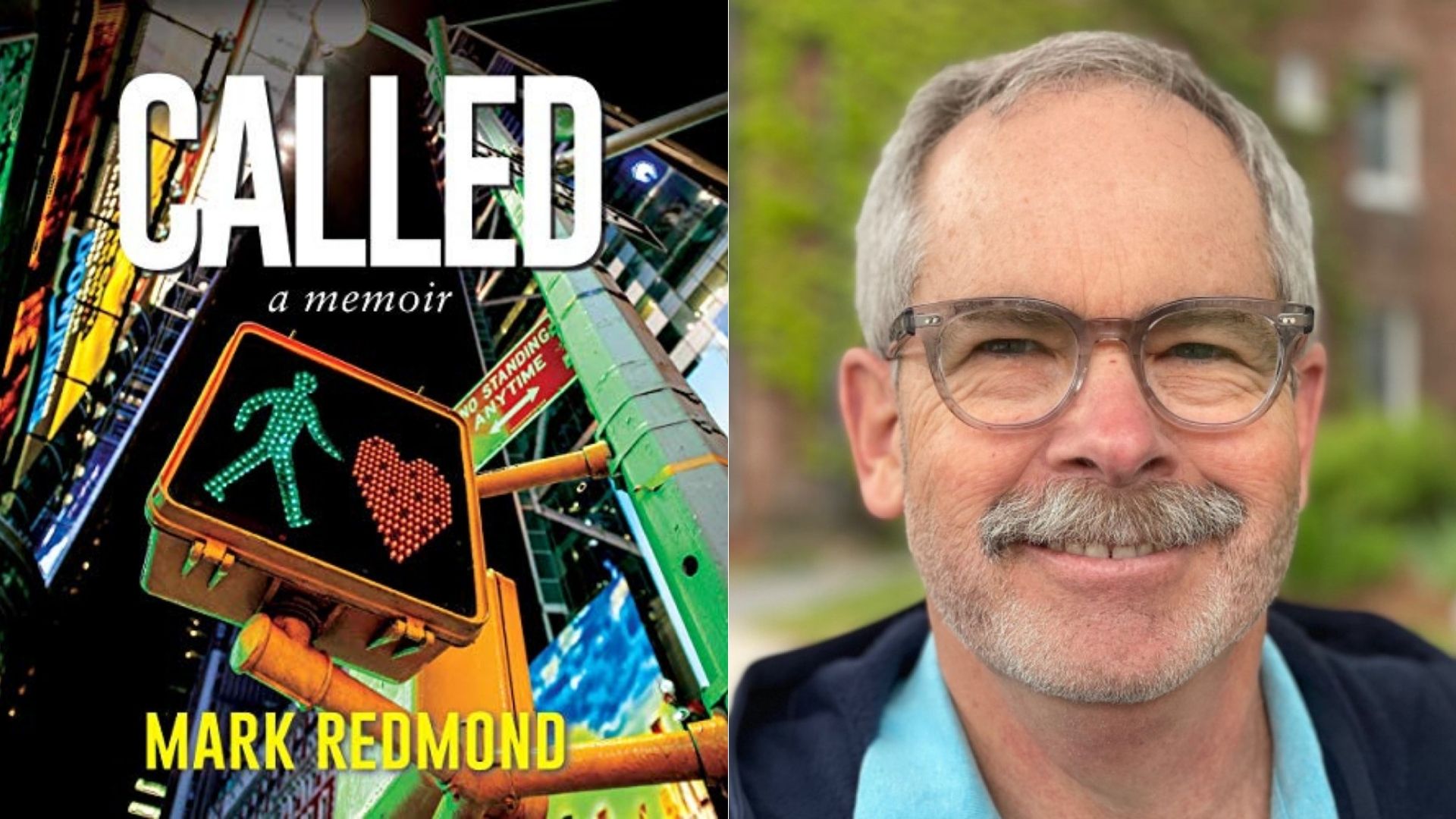 From the stage to a page, Mark Redmond is a storyteller. After getting started with storytelling organization The Moth, he took the stage in season 1 of WORLD Channel’s ‘Stories from the Stage’ to share his story of standing up for what was right, even when it wasn’t popular. In May, Redmond published a memoir, ‘Called,’ that details his 20-year career as executive director at Spectrum Youth and Family Services in Burlington, VT, his experience telling stories across platforms and his personal mental health journey. Earlier this year, Vermont Public Radio’s ‘Morning Edition’ host Mitch Wertlieb and morning news editor Matthew F. Smith spoke with Redmond about his book, and WORLD checked back in with him ahead of the season 5 premiere of ‘Stories from the Stage.’

WORLD Channel: How have your experiences differed between telling stories on stage and writing them down in a memoir?

Mark Redmond: I enjoy both mediums a great deal. I’ve done a lot of writing and been published in places like the New York Times, Washington Post and Forbes and had one book published back in 2004. Telling stories on stage is something more recent. It all began when I left a two-minute message on The Moth’s pitch line in 2013, and before I knew it I was on stage in Vermont’s largest theater telling a story. The Moth then started their monthly Slams in Burlington and I went to those and told stories. Then I heard about other podcasts such as RISK!, The Lapse, Strangers and eventually Stories from the Stage. So many times afterwards someone would say to me, “When do we see these stories in book form?” which led me back to writing. But it’s not as simple as just transcribing a story you told on stage into print form; it’s a very different medium, so that was the challenge, moving them from stage to page.

WC: Appearing on ‘Stories from the Stage’ and writing ‘Called’ require a certain level of vulnerability, something people often find intimidating. How do you manage sharing your stories with such a large audience?

MR: The first time I told a story on stage was at a Moth Mainstage in a packed theater in Burlington. I went first, the lights were blinding, but I recognized the silhouette of someone I knew in the first row. I told myself, “Tell the story as if you were telling it to her, one on one,” and that worked. It’s a heart-wrenching story, and I had cried in the middle of it previously when telling it to people, but I knew when I stepped on stage that I could not do that this time. So, I had to walk that fine line of being vulnerable without losing it completely, which for me is not easy, but I did it.

In terms of the book, a number of people have commented, “You were very vulnerable in it,” and I believe they are specifically referring to one chapter in which I write very openly about a very deep depression I experienced after my divorce in 1994, when I had to seek psychiatric help and go on medication. That was the most difficult chapter to write, but I just felt that episode was so central to my life, it changed me so much as a person, that I could not leave it out.

WC: What advice would you give to first-time storytellers or someone thinking about getting on stage themselves as we begin Season 5 of ‘Stories from the Stage?’

MR: I love to encourage people to tell their stories, including getting up there on stage to tell the world. It’s frightening, intimidating and your heart will probably be pounding. But remember this: that audience wants you to succeed. They are there because they want to hear what you have experienced and what you have to say. They are on your side. You may be up there on stage alone, but you are not alone.

WC: Your career is an inspiring one. What do you hope people gain from listening to your experiences and hearing your stories?

MR: I tell these stories because I believe they give people hope — hope that people can change, and they can change for the better. People can overcome their addictions. They can overcome their wounds. They can heal. But it just doesn’t happen by chance. It happens because of qualities like perseverance, resilience, dedication and courage. And it takes something else: It takes other people who are willing to leave their bubbles, to leave their comfort zones, and reach out in a spirit of compassion, care and love. And when you have those two things in combination, that’s when amazing, incredible, miraculous things happen. So if you leave here tonight with any message at all, I hope it is that.

Mitch Wertlieb: Your book is called ‘Called.’ This title seems quite intentional to me, in the sense that you had a calling to do this kind of work. What can you tell us about what you did before you found your calling at Spectrum Youth Services?

MR: I majored in finance at Villanova University, I was president of the Finance Society, I finished near the top of my class and I got this great job in a manager training program for a multi-billion dollar insurance company on Madison Avenue. So that's what I was doing. That was the path I was on.

And I heard about Covenant House in Times Square, which worked with teenage homeless and runaway youth. And a friend was there and said, "We could do some volunteer help." So I would go there, one night per week after work.

Time Square then was a very dangerous place — now it's quite Disney-fied. I would work with the kids there, hand out snacks, play basketball with them, those kinds of things. And I began to realize, that's what I really enjoyed doing. And I remember going back to a meeting with my corporation, and there was a senior vice president, he had the 10 of us in the room. And he said, "We're now at $300 billion in assets, and we need to get to $500 billion in assets by the end of the decade! And that's what you all need to dedicate yourself to!"

And I just remember sitting there thinking, "That's not what I want to dedicate myself to." So, shortly after that, I quit my job and started working with homeless youth. Some people thought I was crazy. It felt like the sanest thing I had ever done in my life. I had not even a little bit of a doubt when I actually made the decision.

MW: You talk about struggling with mental health challenges, things like depression. How have your own experiences in life contributed to the work that you're doing now?

MR: I did go through a serious depression in 1994, after I got divorced. And it's funny, that's just one chapter in the book, and people have really focused on that. Because I talked about how I needed to go for professional help. I needed to see a therapist and a psychiatrist. And I went on medication, and I worked through it, and I became better.

MW: Working with at-risk youth at Covenant House, then working with Spectrum for nearly 20 years, how do you avoid burnout in a field like that?

MR: First of all, and I even tell our staff, this is a marathon. It's not a sprint. You need to take care of yourself. And while we do help many, many young people, you're not going to be successful with all of them.

I take time off. I start every day with meditation, and with prayer, and with yoga. And I have a wonderful wife who's supportive of me. I exercise. I go to the Green Mountain Monastery in the Northeast Kingdom once a year to spend a weekend in retreat. And I think all of those things are what has really sustained me for, really, decades.

MW: The foreword to your book is dated April 2020. Then the pandemic hits. If you added a new chapter to this book now, what would it cover? What happened over this pandemic year that perhaps you were not quite prepared for, and how did it affect the people you work with?

MR: You know, the pandemic just hit so hard and so fast. First of all, we were able to do telehealth for all of our counselors and mentoring. But we had 16 formerly-homeless youth living with us, 10 more in a warming shelter around the corner, and our drop-in center. We just couldn't say to them, "Oh, you have to go."

So I said to our staff, if you are too afraid to come into work because you might get sick, don't come in. We'll still pay you. We won't even ask you to take a health day. And not one person, Mitch, took me up on that. Everybody still continued to come into work. But our staff were just so wonderful, and they hung in there.

When the pandemic first started, nobody had masks or PPE, we didn't know how it was transmitted. And I went in that first night to our shelter, and I saw a worker, and two kids had symptoms. And I kept saying to her, "How are you? Are you okay?" And all she was worried about was one young man, who already had high anxiety disorder, and he had symptoms, and she was worried about him. And it's funny, she just left us after four years. And I said to her, that said so much to me that night. I kept asking you about you, and how you're feeling, and all you were worried about was that young man. So, that really speaks a lot about the people we have at Spectrum, and the kind of care and compassion they have in the work that they do.

Mark Redmond has led Spectrum Youth and Family Services in Burlington, VT for nearly two decades, and now he's adapted his one-man show performed on Broadway and in Burlington into a memoir, 'Called.' It recounts the experiences that led him to working with at-risk youth and the lessons he's learned from that career.

Episode
Stories from the Stage
Welcome to the Neighborhood

Neighborhoods are forever in flux. Hosted by Wes Hazard.

Sharing extraordinary tales of what it means to be human.

Article Experience Stories from the Stage: The Podcast

Liz Cheng and Patricia Alvarado Núñez, co-executive producers and co-hosts of Stories from the Stage: The Podcast, discuss upcoming new episodes of the show.

Article Stories from the Stage: The Summer Podcast

Stories from the Stage: The Podcast is back this summer with new episodes of love and loss, personal courage and unexpected triumphs.