By Vision Maker Media/ as edited by WORLD Channel 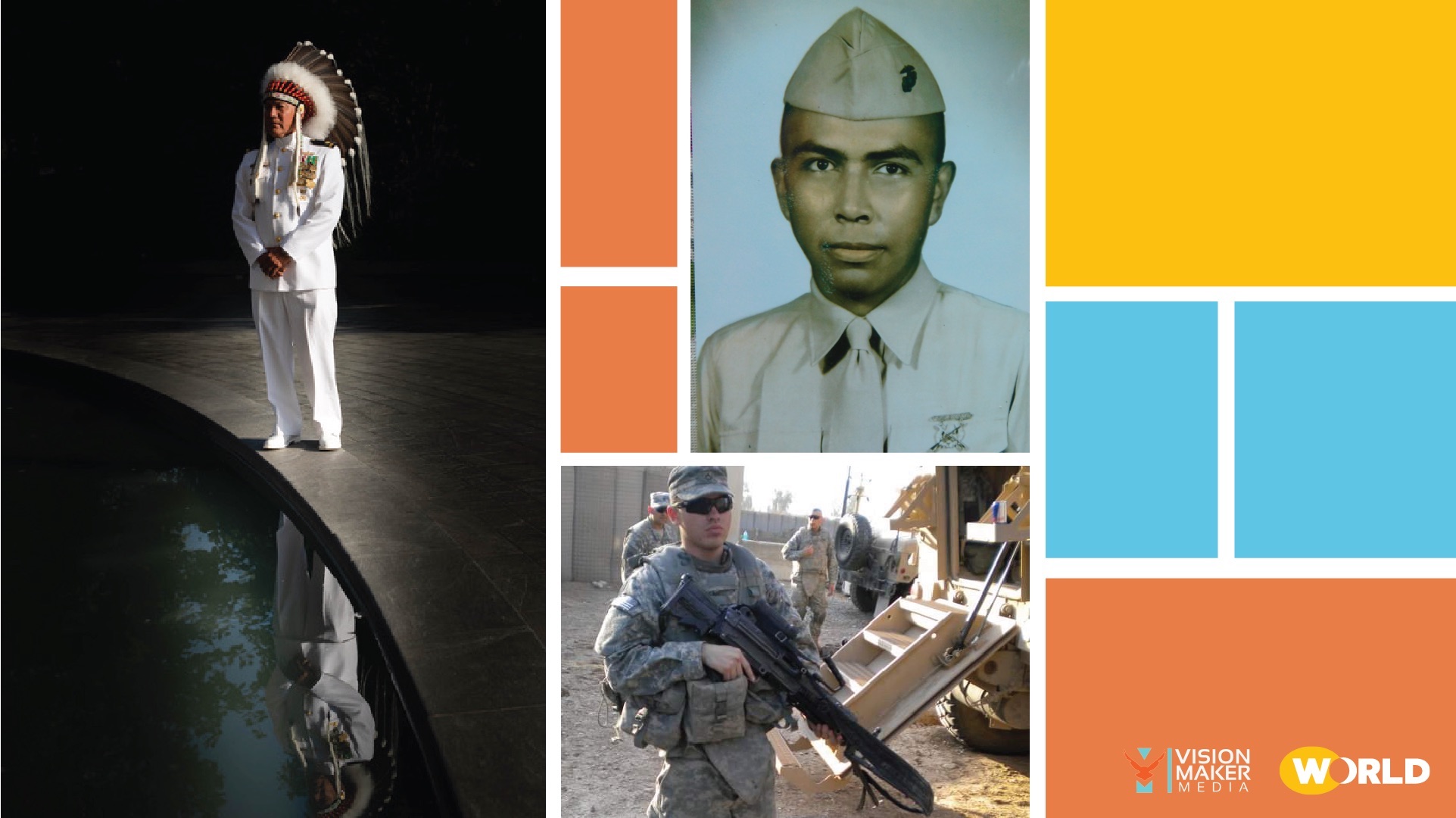 Serving in the military is significant and meaningful to Native people. In many Native Nations, veterans are regularly honored  and recognized at community gatherings, including powwows, as part of the opening and closing activities. Many Native homes have pictures of their sons, daughters, parents and grandparents, who have served or are currently serving in the military, sometimes with several generations of veterans hanging on a wall of family portraits. This veteran lineage and community respect mirrors the many Native Nations’ histories of warriors “counting coup” - a significant recognition of bravery and honor, or of allegiance to Indian chiefs fighting wars against and with the U.S. government as citizens moved westward, claiming U.S. territories along the way.

Sloan Rupp currently volunteers his time on the Lincoln Indian Center board located in Lincoln, Nebraska. At the age of 20, Rupp suddenly lost his job in the economic crash and housing bubble of 2008. Feeling uncertain of the future, he contemplated his life path. His blood memory of cultural survival, taught to him by his father and the warrior spirit as a young Sisseton Dakota, guided him in the direction of the warrior’s way. Dakota warriors had rites of passage where they emerged as part of the warrior society in traditional times. These role models and his Dakota culture established a belief and understanding that a warrior spirit was a commUNITY role that protected and served the people.

Rupp’s great-grandfather had served in World War II and his grandfather was First Sergeant in the National Guard, while a life illness prevented his own father from serving in the armed forces. Through his paternal role models of service men, and his own innate Dakota warrior spirit to protect and serve the people, Rupp felt his next direction was to join the service, and he did so in the Army. He joined the U.S. Army and was stationed at Fort Stewart, Georgia before deploying to Iraq. To Rupp, the decision to join the Army was part of coming into his own as a provider to society, his culture, a way to give back to his people and a test for himself to learn, experience and mature further into adulthood. 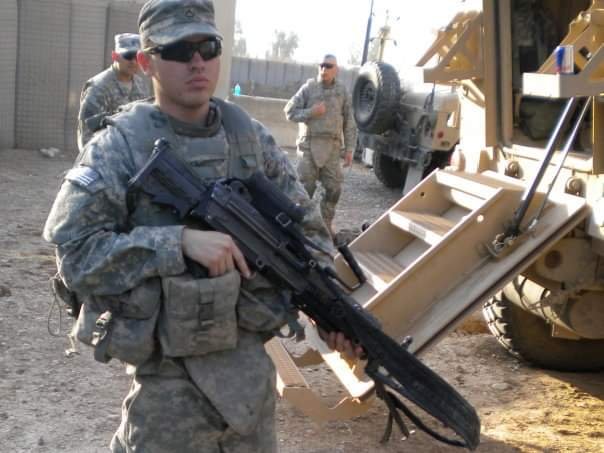 His Sisseton culture historically had their warrior society, and warrior stories in the Lakota, Dakota and Nakota bands remain memorable. But Rupp has not experienced this depth of acknowledgement for veterans in American culture at-large. The constant “thank you for your service” seems hollow, in the way that the automatic “good morning” greeting lacks genuine interest, connection and community.

When asked what his sense is of 'home or commUNITY' as a veteran, Rupp responds, "While serving, I learned a new meaning for home. Home is wherever the people I love most are safe and united.”

Fellow veteran Raymond A. Baker retired in 2015 from the U.S. Navy after a thirty-year career. He joined the military service as a young man who wanted to see the world outside of his rural reservation community in the four corners region in southwest Colorado. Like Rupp, he always had military role models in his family. Baker’s grandfather served in the Army during WWII and two half-brothers who served in the Army during the Korean and Vietnam Wars, as well as in the Navy. During his Naval career, Baker rose through the ranks from deck seaman to eventually retiring as Officer in Charge Specialized Research Diving Detachment and Chief Warrant Officer Four, Diver, where he had commanded a worldwide operational command for Chief of Naval Operations (CNO) Special Programs and the Submarine Development Squadron Five Diving/Salvage Officer. 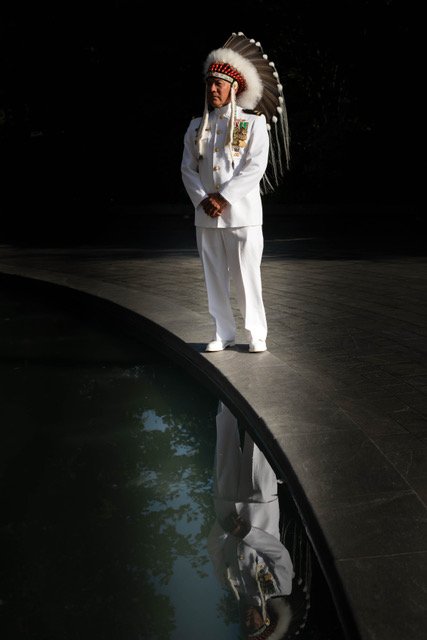 The most significant and meaningful “welcome home” was when the Southern Ute Veterans Association recognized his Naval career and years of service. Baker is now a member of the Southern Ute Veterans Association, where he and other esteemed volunteers frequently are asked to “present the colors.” The presentation of the colors is a ceremony that marks an anniversary or event. The ceremony involves an armed services formation and presentation of the regimental colors that presents or retires a flag or flags. The "colors" refer to a flag. A color guard, consisting of two honor guards and two flag bearers, presents or retires the colors. Proper respect should be given to the colors at all times during the ceremony.

The Southern Ute Veterans Association has ‘presented the colors’ from Hawai'i to the Smithsonian in Washington, D.C., around their own region of communities, to many Boys & Girls Club events, different powwows, and even to the Inauguration event of the new Governor of Colorado. Baker is proud to volunteer his time in this manner, to represent Native Americans in the military, and be a role model in his own tribe.

Baker has led the top one percent of the Navy’s best deep-sea divers for all vital missions critical to national security. His leadership has contributed to the successful mobilization of operational assets in harsh environments, requiring him to coordinate efforts with foreign assets, joint armed forces, and Department of Defense (DOD) organizations worldwide. As an elite status of Navy divers, Baker was hand selected from 47 Chief Warrant Officer divers to join an advisory team for all military/DOD operations.

To put his expert knowledge and achievements in perspective, there are about a half million sailors in the Navy and about 1700 deep-sea divers, of which only around 50 become CNO Special Program officers with assignment. Baker will be working with the military again as part of the Air Force in the field of diving.

“I’m proud to have my skills needed by other services and look forward to working with the Air Force,”  says Baker in reflection upon his Naval service.

Theodore C. Charles was honorably discharged from the U.S. Marine Corps. (USMC) after serving from 1961 to 1966.

Upon completing two years of college, Charles chose to enlist in the USMC. A major influence to join was the knowledge that his grandfather had served in the Army as a scout and his two cousins finished their tour of duty as Navajo Code Talkers during WWII in the Marine Corps. 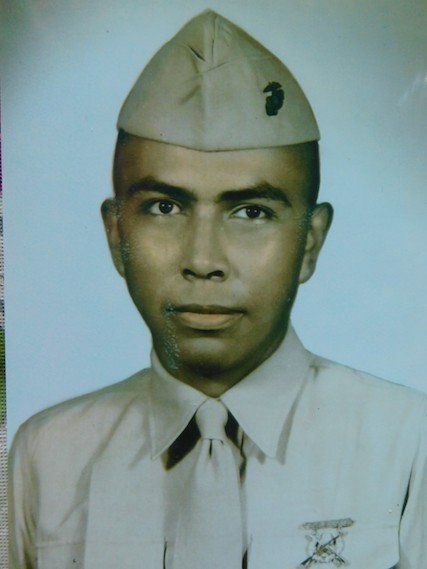 Charles’s training in the USMC began at Marine Corps Recruit Depot in San Diego, California before going onto the Infantry Training Regiment (ITR) at Camp Pendleton in California.

Camp Pendleton is recognized as 'The West Coast's Premier Fleet Marine Force Training Base' of all the Marine Corps bases throughout the world. Upon completion of ITR, Charles was ordered to be stationed to A-1-1 at Camp Pendleton and soon deployed for the Cuban Missile Crisis - a tense, 13-day political and military standoff in 1962 over the installation of nuclear-armed Soviet missiles on Cuba, just 90 miles from U.S. shores. This confrontation was the moment when the United States and Soviet Union came closest to nuclear conflict.

After the crisis passed, Charles was deployed to Okinawa as E Company 2nd Battalion 9th Marines (Okinawa E-2-9). Following Okinawa, and just as he was nearing the end of his service, he was next prepared to be deployed to Vietnam as his duty was extended to an additional 120 days. As prepared as he was to fight in the Vietnam War, he eventually was not deployed and returned home.

Just as he was nearing the end of his service in 1966, he was preparing to be deployed to Vietnam as his tour of duty was extended an additional 120 days. As he prepared to fight in the Vietnam War, he eventually was not deployed and returned home.

Charles is proud to have served in the USMC and says the phrase ‘once a Marine always a Marine’ remains true among many veterans before him. The Corps taught him valuable life lessons that instilled in him a focus to mean what you do with respect, intention and devotion, a never give up attitude no matter how great or small the challenge may be, and the realization that from training to discharge it’s a life or death reality. There is a great and powerful connection Marines have to one another whether having served together or not. To Charles, his comrades in arms are like brothers, one of the family. The best greeting and acknowledgement that he enjoys is not so much ‘thank you for your service’ but ‘welcome back.’ These two words always cheer his heart and he hopes it does the same for other service members.

As Charles says: “If you’re gonna join the Corps, beware the first steps that you put yourself in because many, many Marines have already stepped before you.”

Vision Maker Media empowers and engages Native people to share stories. We envision a world changed and healed by understanding Native stories and the public conversations they generate.